Famous Lifespans:
The Price of Fame?

The fact that occupational factors can affect mortality have long been known. But are famous people subject to the same trends as the rest of us?

Based on the idea that a person having an obituary in The Daily Telegraph implies a certain level of fame or success, we used data from over 1,000 obituaries between 2016 and 2020 to find out.

Do super-healthy sports stars outlive us all? And does the stress of running the country send politicians to an early grave? Find out below...

Age of Death by Occupation Category 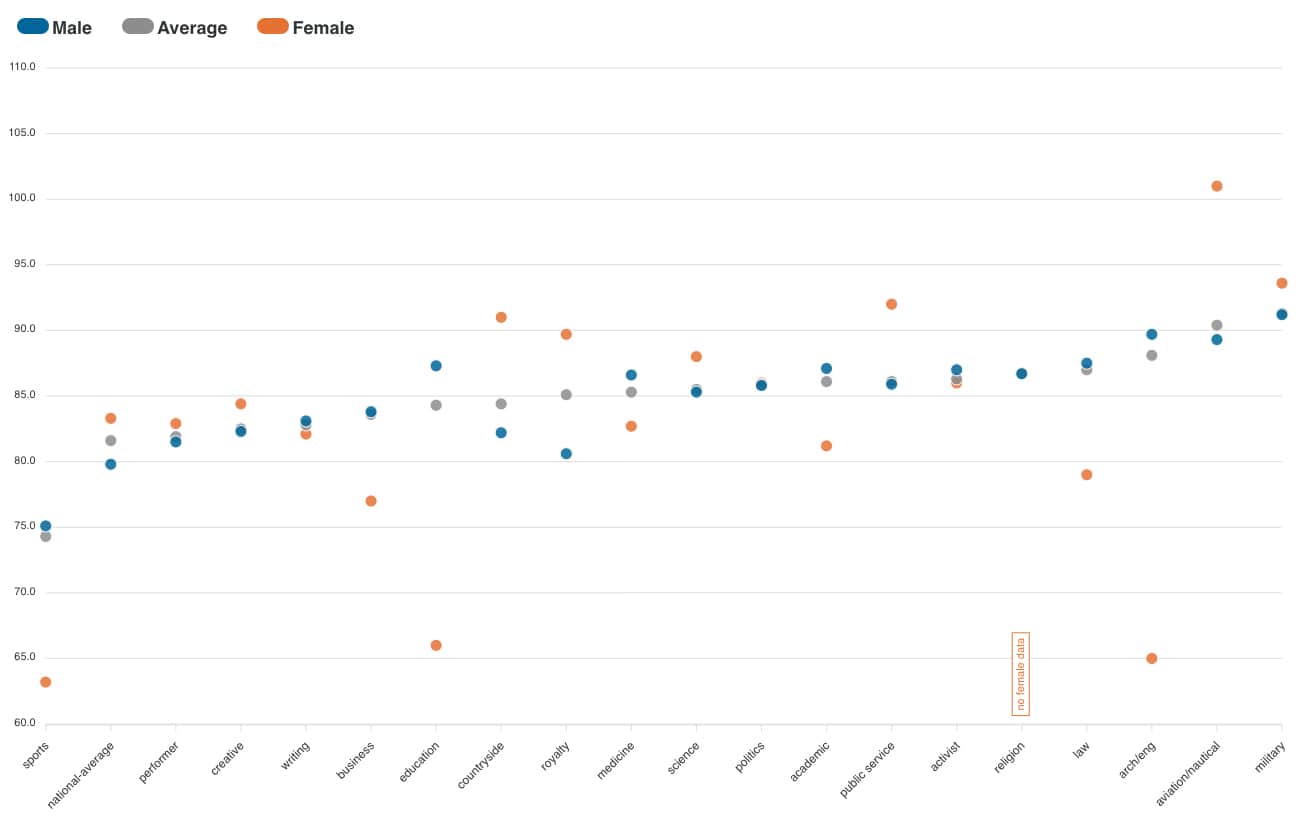 When all the data was analysed, we found some surprising results. If you want to have a long life, it looks like the military is the career for you. Ex-servicemen and women had an average age of death of 91.2 and 93.6, respectively. Compare this to the national averages of 79.8 and 83.3 for men and women.

The subjects for this study are obviously not representative of the military as a whole, as they are skewed towards the upper ranks. Nevertheless, previous studies have found a protective effect from military service that is not affected by rank.

A large part of this is likely due to the healthy worker effect. This says that people able to work, especially in physically demanding jobs such as the armed forces, are necessarily healthier than the population as a whole. And so, are expected to live longer.

Air Commodore Dame Felicity Hill was one of those long-lived ex-Forces members. She joined the Women’s Air Auxiliary Force at the outbreak of the Second World War and rose through the ranks quickly. Eventually, she became the first woman to hold the rank of air commodore.

She died peacefully in January 2019 aged 103. In 50 years of retirement she wrote two novels and an autobiography, as well as volunteering locally. Although she became increasingly frail and deaf as she got older, she still kept her renowned sense of humour.

At the other end of the scale, sports stars live much shorter lives than you would expect. The average ages of death for men and women in this category were just 75.1 and 63.2, respectively.

It’s possible that, despite the undeniable health benefits of playing sport, the demands of intensive training and elite level performance comes at a cost. The type of sport may also play a role.

A contact sport such as football or rugby may affect its players’ lifespans through the extra physical stresses involved. Football is the most common sport of the athletes analysed - 19 of the 89 sportspeople were footballers.

In October 2019, a 22-month University of Glasgow research project found that former professional footballers are three and a half times more likely to suffer from serious neurological diseases, such as Alzheimer’s and Parkinson’s. In the wake of this, the FA has banned heading footballs in training for children under 11.

Johan Cruyff was one of the obituaries analysed. He was one of the greatest footballers in the world during the 1970s. Cruyff won European Footballer of the Year three times, and lifted three consecutive European Cups with Ajax. 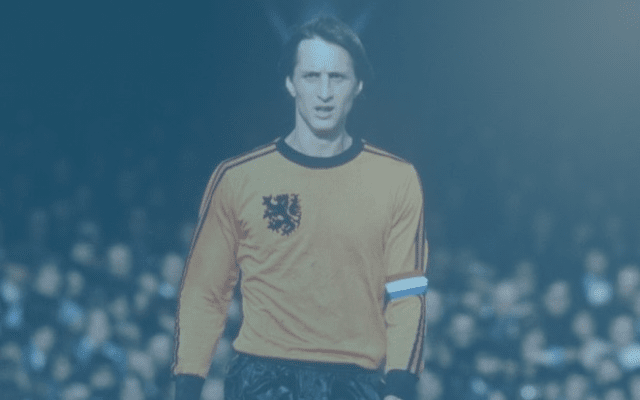 He died in March 2016 aged 68 from lung cancer. Cruyff had been a heavy smoker since he was a boy, smoking more than 40 cigarettes a day. He quit in 1991 after undergoing an emergency bypass operation, but perhaps it was a case of too little, too late.

People who practise extreme or dangerous sports generally also have shorter lifespans than the general population. Not one of these sportspeople from our research lived longer than 65. This will also drag down the average.

Finally, how do famous people compare to the UK as a whole? When all 1,034 obituaries were analysed, the great and the good came out ahead. But only just.

Male Average Age at Death across All Categories 83.8

Female Average Age at Death across All Categories 83.3

The average life expectancy of a UK citizen born today is 79.8 years for men and 83.3 years for women. Unexpectedly, the average age of death for famous men in our study was older (83.8), and for women the same (83.3), as these averages.

This discrepancy is best explained by the finding that, relative to men, women are significantly over-represented in the sports, performer and creative categories. These proved in turn to be associated with shorter lifespans. And women are under-represented in longer-lived categories such as military and aviation/nautical.

This is interesting because women tend to live longer than men, all other things being equal. A mixture of biological, behavioural and environmental factors seem to account for a longer lifespan in women. But that is not the case here. Perhaps the price of fame for women is more pronounced than it is for men.

Sex, age and occupational data were obtained from 1,034 consecutive obituaries published between 2017 and 2020. These were in turn obtained from the online archives of The Daily Telegraph ( https://www.telegraph.co.uk/obituaries/ ).

Each record was assigned a ‘profession’, with the initial specific entry allocated to a larger generic ‘area’ grouping to speed up analysis. For example, singers, dancers, actors and musicians were classified as ‘performer’, while historians, linguists and philosophers were classified as ‘academic’. Any professions that could not be defined in this manner were instead classified as ‘other’.

The average ages at death for men and women in each area, as well as an overall average across all areas, were calculated.

UK national life expectancy data was obtained from the Office of National Statistics. Period life expectancies (2018-based) were used for analysis.